Our journalist David Harris continues his exploration of the both strange and wonderful cinematic realm that is the Fantasia International Film Festival. Here’s his latest batch of reviews. Today: A Rough Draft, The Man who Killed Hitler and then The Bigfoot, Da Hu Fa, Chuck Steele: Night of the Trampires, Fireworks, and Lôi Báo.

Immediately after watching A Rough Draft, a lot of reviewers got into a circle and came up with the same conclusion. It’s the perfect title to describe the quality of the movie we just watched. Loosely based on a science fiction novel of the same name, it starts off with lots of potential. Kirill is a wunderkind game designer slowly becoming an unperson. His friends and colleagues don’t recognize him, his apartment is occupied by a brand new tenant, and every record of him has been erased. It’s absolutely terrifying experience. Then like many young adult stories, he’s thrust into a parallel universe, where he can make reality his own.

The slow start is perfect for a thriller, until the plot needed to catch up. In the next hour we had a crash course into the rules the world, a romance that resembles a commercial for Florida oranges, and a revolution (I think). We then continued to rip into this cluster of messes, trying to piece together everything we caught to create a coherent film. After filling in plot points we collected, we finally came to a realization that this movie would have been a perfect miniseries. Even if you read the novel, A Rough Draft is not worth watching because it wouldn’t do the story justice.

The Man Who Killed Hitler and Then The Bigfoot

How can you not watch a movie called The Man who Killed Hitler and Then The Bigfoot that stars Sam Elliot? It seems that the Fantasia International Film Festival was created for movies like this. Pulpy plot points with enough schlock violence where the whole story is told in the title? What more could I ask for? I had to skip a movie to make sure I got a spot in line. I went in expecting my lizard brain to go on the fritz but it wasn’t anything I expected it to be. I was pleasantly surprised. The title wasn’t misleading, I just would put the emphasis on the word MAN instead of KILLED. 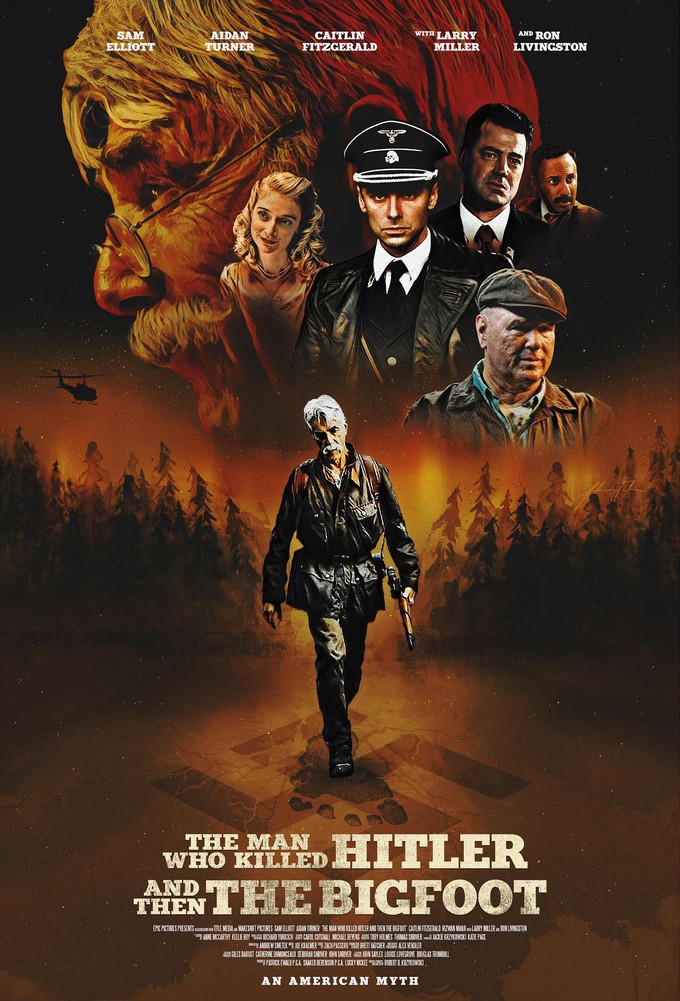 The Man Who Killed Hitler and then The Bigfoot is about Calvin Barr’s self-reflection as he’s getting long in the tooth. The movie is told from two perspectives. In the past, Aidan Turner plays a young Calvin on his mission to kill Hitler. While in the present Calvin recalls the choices he’s made, the regrets that slipped through his fingers, and the name he made for himself.

I don’t think the movie would have had such gravitas if Sam Elliot wasn’t the star, he was perfect for the role of Calvin. Despite the occasional moments of poor pacing and B-level plot points, The Man who Killed Hitler and then The Bigfoot is a sombre tale of love, and purpose.

I can’t properly gauge the quality of this film to the point I’m not sure how to review it. It has an awful translation. It’s poor word choice, incomplete sentences, and plot holes are completely obvious.  I could be wrong, but I think the story is about this race of humanoids, a lost prince, and a warrior’s duty  to protect him.

To it’s benefit, “Da Hu Fa” is beautiful. The action was slick and easy to follow, making the fast paced scenes enjoyable to watch. In addition, the world they created was stunning. They built cities, mountain ranges, tunnels, and forests vibrant with colour and life. Da Hu Fa would have worked better as a film void of any dialogue. Until a good translation is available, don’t watch it.

Chuck Steele: Night of the Trampires

Chuck Steele is your no-nonsense testosterone fuelled rage cop of the 80s. He has big hair, a big chin, and closet full of leather jackets. His African American chief is pissed off with his shenanigans, especially when all his partners keep on dying on his watch. He then discovers a nest of Trampires (Vampire homeless people) starting to spread like wildfire.

This over-the-top gortastic, non-pc Claymation is hysterical. It crosses all the lines, and shows no mercy. It doesn’t have many layers or morals, it’s only purpose is to delight. Most of laughs were spot on. The only criticism I could give is that some of the jokes are incredibly dated. For example, there are simple visual cues of a crossdresser. That’s it. Is it in bad taste? Kind of, but for a movie that’s trying to push buttons, there’s no bad intent, it’s just a weak joke. This movie won’t be for everyone, but if you enjoy a lowbrow high-quality horror/comedy then Chuck Steele: Night of the Trampires is for you.

Love-bird number one, Nazuna, has some heartbreaking news. She’s moving away at the end of the year. Two boys, Norimichi and Yusuke are both pining for her love. Through the magic of a relic, Norimichi discovers a way to relieve a new timeline using the powers of IF.

I quite enjoyed this movie. The “what if” scenarios Normichi puts himself through are identical to the ones I’ve thought about in my youth. It rips off the “Groundhog Day” effect to a degree, but it plays it well. I believe the performance is in the representation of the teenagers.  can’t get mad at these students because behave  their age: slaves to their irrationality and emotions. They sound real. At the ripe old age of 31, I see all their mistakes, and I believe I don’t hold their decisions against them. Fireworks pulls your heart strings, has it’s overly sappy moments, but is a lovely date movie. Whatever else, enjoy the music and artistic design, it’s sublime.

This Vietnamese superhero movie plays all the tropes straight. Tragic origin story, loving family, and something about obligation and ability. Comic book artist (you see the metafiction) Tam has cancer. He puts himself through an insane operation, and suddenly he’s given super strength and reflexes. There’s an attempt to make it sound more technologically sound, but it’s difficult to make it come off serious.

Some super-hero movies fail because they don’t have an underlining theme. They toss in too many side plots, and don’t really get into the action early enough. Loi Bao suffers from this epidemic. It seemed that it couldn’t decide to do something heartwarming about a young man’s yearning to be a great protector, or a typical Nicholas Cage action film with a ridiculous premise. To make matters worse, it was difficult to show sympathy for his family. His wife is bland beyond belief, and his son, for a lack of a better word, is aggravating. He’s loud, overly cutesy, and utterly annoying. The rest of the cast are cookie-cutter cutouts of your typical superhero genre: love interest, femme fatale, wise mentor, villain, and the villain’s second in command. I don’t have much more to say on them, what you see is what you get. There really isn’t too much to this movie, and it will be forgotten in the following months.