Vous êtes ici:Accueil»Culturel»Cinéma / Télévision»Avengers: Endgame, a Movie for the Fans

Avengers: Endgame is not for just anybody. This movie is for the souls who watched every movie on opening night, and for those who rewatched them again before every major event. Marvel’s Avengers: Endgame is the movie event of the year. It’s a love letter to the diehard fans of the past decade, and it works. It’s the perfect ending to an anthology of wonderful stories.

In Avengers: Infinity War, Thanos won. He got hold of all the infinity stones, socketed the gauntlet with those rainbow-coloured rocks, and simply snapped. Half the world was decimated, and he retired to a farm. The heroes were left distraught. Everyone lost at least one person they were designated to protect. Aside of a couple of people, the original six heroes from the first Avengers movie remained. It was a terrifying end to a movie. Heroes are designed to win, and letting it end that way is shocking. Avengers: Endgame is the second part to this story where they need to prove why they are called superheroes. After being brought down to their knees, they get back up and give Thanos everything they have in their arsenal, saving the world and avenging the fallen.

We go where the heroes are, and fight back.

Avengers: Endgame is 3 hours of pure fandom. It brings in everything and everyone to the big screen. This makes it loud and bursting with superhero action, quippy lines and plot points. This is not simply a stand-alone film; it needs to be watched in conjunction with the other movies. This may alienate the audience, but they don’t expect people to simply walk in to this movie blind and expect to know what’s going on. But that’s not a bad thing. It’s not meant for the casual movie audience. Watching this without seeing any other Marvel movie is like watching the last Harry Potter movie only. On the surface,  it can still be enjoyable, but that enjoyment will be limited, because it doesn’t handholds the viewer throughout the film. It expects them to know who the characters are, and their motivations. But, for those who stayed with the franchises all these years will be treated to something simply wonderful.

Avengers: Endgame’s action is on point. The battles are epic and beautiful. Everyone uses their abilities to their fullest, and some come with a unique surprise. This is much better than the simple fights between two entities who punch hard. More importantly, this kind of action gives everyone their epic hurrah and day in the limelight. With such a long runtime, the Russo brothers allowed for enough plot exposition to get through without overshadowing character arcs. Some end, others begin, while a few continue on to potential new paths. It wastes no time putting the attention on why we watch these movies. It’s for the heroes. Avengers: infinity War is Thanos’ story, but Avengers: Endgame belong to the Avengers. This is their story. 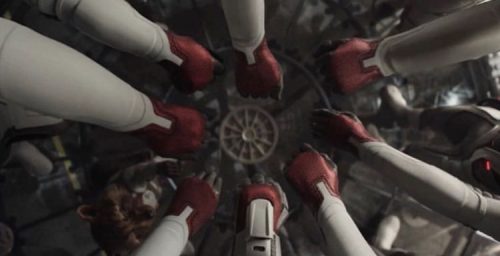 Avengers: Endgame is simply divine. It’s a beautiful swan song for the fans. It makes sure that every moment counts, though some jokes do fall flat. The plot may be a little convoluted, and it’s best not to nitpick over every detail. It is a comic book movie, sometimes just accepting the plan is for the best, it makes it more fun. This movie may be the end in many cases, but it’s not the end of ALL Marvel movies. There are numerous sequels coming out, the new series are in fruition, and it’ll be financially irresponsible to end it all here. There are more stories left to tell. This may be the endgame for one generation, but it’s not the end for everyone.

Hellboy is a Gory, Violent Mess that Still Entertains